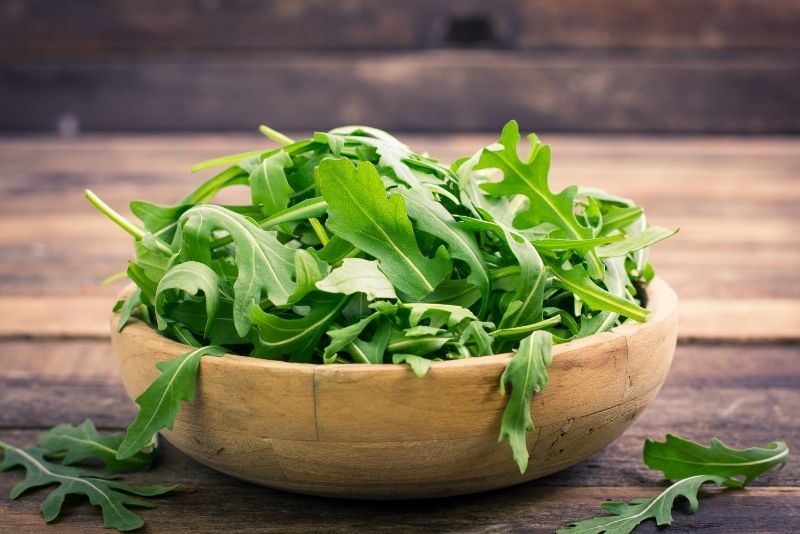 Arugula is a leafy green vegetable that can be used in salads, sandwiches, and even on pizza.

Its peppery taste pairs well with many other greens or vegetables to create mouth-watering dishes.

However, if you don’t have any arugula at home but still want to make something delicious for lunch, there are plenty of arugula substitutes you can use instead – 11 to be exact!

You can substitute arugula with dandelion green, watercress, radicchio, endive, spinach, purslane, kale, and others as I have mentioned below.

Arugula is a leafy green vegetable that belongs to the Brassicaceae family.

It has a slightly bitter, peppery taste and is often used in salads, pasta dishes, or on top of pizza. Arugula also goes well with feta cheese, tomato sauce, garlic, lemon juice, and olive oil.

However, arugula’s peppery taste is great for many other dishes as well, such as pasta and risotto.

Arugula is low in calories, contains Vitamin A, calcium, magnesium, phosphorus, potassium, and iron. It packs a punch when it comes to an arugula’s health benefits too.

Dandelion greens are a common substitute for arugula.

They have a bitter and peppery taste, but it is less intense than the original. It also has a slightly stronger flavor than other leafy greens like watercress or baby spinach.

You can enjoy it with salads, soups,  or stews.

To make dandelion greens, simply boil them with water or chicken broth for 15 minutes. Afterward, you can use it with your dish of choice!

Watercress is a common substitute for arugula in salads, soups, and sandwiches. It has a similar taste to arugula, but it is slightly milder.

Watercress has many health benefits as well. It contains Vitamin A, B6, C, E, folate, iron, magnesium, calcium, phosphorus potassium, and fiber.

You can eat it raw or cooked. Add watercress to your favorite salad, soup, or noodles dish! When adding it to a cooked dish, make sure to add it, in the end, to avoid the watercress from being mushy.

Baby spinach is a popular substitute for arugula in salads because of its slightly milder taste compared to the original spinach.

There are also other types of baby greens you can use as substitutes for arugula like baby kale, romaine lettuce, and red oakleaf lettuce.

Baby spinach is rich in Vitamin A, B2, B6, E, folate, calcium, magnesium phosphorus potassium, and fiber.

It’s perfect for adding to pasta dishes or even soups!

Frisee lettuce is a type of chicory. It has a bitter and peppery taste, but it’s not as intense as arugula or watercress.

Frisee lettuce also goes well with other leafy greens such as dandelion green and baby spinach.

You can enjoy it in a salad or as a side dish!

Escarole is a leafy green vegetable that tastes bitter and slightly peppery. It has a stronger taste than other leafy greens, so it makes a great substitute for arugula in salads or as a side dish.

It’s perfectly safe to eat raw so you can add it to your favorite salad dish.

Radicchio is another popular leafy green vegetable that tastes slightly bitter and peppery. It has an interesting shape as well with red leaves on the outside and white-yellow leaves on the inside.

Radicchio goes well in salads, soups, risotto, and even pizza! It also pairs well with other leafy greens like Frisee lettuce.

You can eat this vegetable raw or cooked.

Purslane is another leafy green vegetable that has a slightly bitter and peppery taste.

Purslane is a tasty plant that has a slightly sour and salty taste when eaten raw. However, it absorbs the flavor of whatever you eat it with so it goes well with fish and beef!

It’s low in calories and rich in many vitamins and minerals. It’s high in potassium and dietary fiber too.

You can add purslane to soups, salads, sandwiches, or even your favorite stir-fry!

Kale is a great substitute for arugula because it has the same slightly bitter and peppery flavor!

It also has more nutrients than arugula like Vitamin A, B6, C, E, Iron, and calcium!

This leafy green veggie can be used in many dishes such as salads, soups, and even in smoothies!

Endive is a leafy green vegetable that also has a slightly bitter and peppery taste, but it’s less intense than arugula or watercress. It has an interesting shape as well with long leaves coming out of the center.

The best thing about endive is that you can eat it raw! You can combine it with other meats or vegetables to make a delicious meal. However, when it’s cooked, the endive loses its bitterness and peppery flavor.

It goes well with many dishes such as salads, soups, and even pasta.

Basil is the perfect way to substitute arugula if you want your recipe to have that peppery flavor. It’s also great for adding more flavors into your meal because it goes well with almost every vegetable dish!

You can eat basil raw or cooked, but it’s best to add this veggie at the end of your dish.

Mixed greens are available in mixed packages at your local grocery store. This type of green is a mixture of different leafy vegetables like arugula, watercress, dandelion green, baby spinach, and more!

You can use it for salads, soups, pasta dishes, or even with bread. Mixed greens go well with almost everything!

Arugula has a slightly bitter and peppery flavor, making it great for salads or side dishes. However, some people like to use arugula as an ingredient in their smoothie or juice too!

It tastes best in spring and summer due to its high water content and delicate leaves.

How Do You Get the Bitterness Out of Arugula?

Arugula is a type of green that has a slightly bitter and peppery taste.

In order to remove the bitterness, you should cook an arugula by boiling it in hot water for just two minutes. This will help reduce the bitterness and make your meal more delicious!

Arugula is expensive, especially if you buy it fresh at your local grocery store. However, some stores offer pre-packaged arugula that’s more affordable and readily available!

Is Watercress and Arugula the Same Thing?

No! Watercress is a type of bitter green that tastes more peppery than arugula. It’s also great in salads, soups, and side dishes because it has more nutrients than arugula.

How to Store Arugula?

Arugula is a delicate leaf that goes bad very quickly. It should be stored in the fridge, wrapped in paper towels.

It will last for two days maximum when kept this way.

To keep your arugula fresh for longer, you can also store it with stems intact in a jar filled with water.

You can also freeze arugula a few hours after it has been washed and dried. Once thawed, however, you should use it within one week.

If you’re having a hard time finding Arugula in your grocery store, we hope this list of 11 substitutes has helped.

It might be helpful to bookmark the page and come back if you can’t find it next time! Happy cooking! 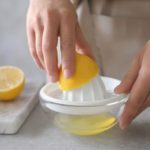 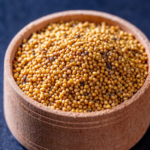 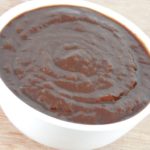