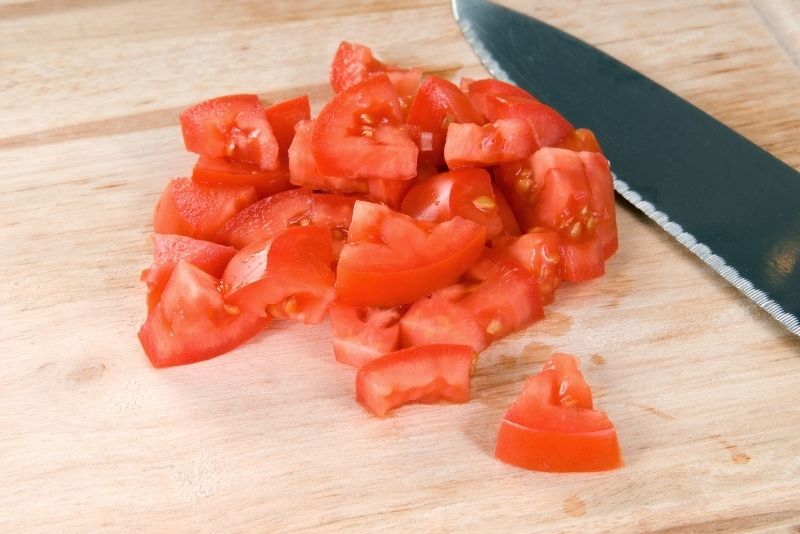 Tomatoes are a key ingredient in many recipes. They can be used to make sauces, soups, stews, and more which is why they are often found in the produce section of grocery stores.

But sometimes you need diced tomatoes but don’t have any on hand or want to save time by not having to dice them yourself when it’s getting late at night?

Below, I’ll explain how you can substitute these ingredients in place of diced tomatoes so you can continue cooking your favorite meal with ease.

If you have a ripe tomato on hand, the best substitute for diced tomatoes is to dice it yourself. Plus, fresh tomatoes are full of flavor. Fresh tomatoes can be diced up by using a sharp knife and cutting them into cubes of equal size.

But make sure to remove any seeds and all of the juice in order to get the best results when cooking your meal.

To peel the tomato, score an “X” on the bottom of it and place it in boiling water for about 20 seconds to loosen the skin.

Then take it out and run under cold water to stop them from cooking. Once they are cool enough to handle, peel off the skin and take out the seeds.

Then you can dice them up into cubes of equal size.

Peeled tomatoes are especially tasty in thicker sauces because they don’t contain any juice or seeds that might make the sauce runny.

You can also use tomato puree as a substitute for diced tomatoes. Tomato puree is made from tomatoes that have been cooked down until they are very soft and can be mashed.

Then it’s strained to get rid of the skin, seeds, and liquidy pulp which leaves you with a smooth tomato base to use in your recipes.

To make this substitute for diced tomatoes,  you can cut up a fresh tomato or open a can of puree and mash it up with a spoon.

Start by adding a little bit of the puree to your dish and keep on adding more until you get enough flavor from it. Then use as much as you need to be able to finish cooking your meal.

Cook the tomato puree longer to add more texture and flavor to your recipe.

Another great substitute for diced tomatoes is tomato juice.

This is a good substitute if you need chopped tomatoes but don’t want the extra liquid that comes with canned or fresh tomatoes.

You can find tomato juice in cans and bottles at many grocery stores, so it’s always easy to have on hand.

Tomato juice is your best substitute for broth, stew, or recipes that include meat, poultry, or fish.

To make this recipe even better, try adding some Italian seasonings like thyme or oregano to your tomato juice.

Last but not least is tomato paste. This substitute for diced tomatoes makes a good choice when you only need a little amount and want to avoid using a can of tomato puree.

Tomato paste is another great option if you don’t want the extra liquid that comes with using fresh or canned tomatoes.

To substitute for diced tomatoes with tomato paste, start by adding just one teaspoon of tomato paste to your dish first and keep on stirring so the flavor goes into your sauce or soup.

Then you can keep on adding more paste, bit by bit until it’s the right amount needed to finish cooking your recipe. To make this substitute even richer, mix the paste with some water before adding it to your recipe.

What Are Diced Tomatoes?

Tomatoes are juicy fruit that can be red, yellow, orange, or green. They have been used in cooking for hundreds of years.

Diced tomatoes are tomatoes that have been cut into cubes of equal size. They are usually used in soups, sauces, and stews so they can create more body to the dish and give it more flavor.

Diced tomatoes are typically used when you want a tomato-flavored sauce or soup but don’t want the seeds and skin.

Diced tomatoes have a rich tomato flavor with a slight acidity. They are rich and meaty with a tangy flavor.

They can be used in both sweet and savory dishes. You’ll often find them in soups or stews as well as sautéed meats, roasted vegetables, and casseroles.

What Are Diced Tomatoes Used For?

Diced tomatoes are used in many dishes, from appetizers to desserts. They add a tangy flavor and texture to recipes.

It usually adds a pop of color as well since it’s red. Diced tomatoes have been known to be used in pizza sauce or pasta, but they can also be used for drinks like bloody marys or soup.

Some great foods that go well with diced tomatoes are pasta and pizza. They also work well as a side dish to meat like steak or chicken, cooked vegetables like green beans or broccoli, and pork too.

You can even use it for sides of chips or french fries. Or you could drown your tomatoes in a bit of oil and vinegar and add salt and pepper to make a flavorful salad.

What Can I Use Instead of Diced Tomatoes in Chili?

If you don’t have diced tomatoes for chili, try using canned whole tomatoes instead.

Just take the canned whole tomatoes and use a knife to chop them up into smaller pieces before adding them to your recipe.

You could also use canned tomato paste or even stewed tomatoes as a substitute.

How Many Tomatoes are in a Can of Diced Tomatoes?

It depends on the size of the can. If you have a large can of diced tomatoes, there will be 14-15 tomatoes.

A medium-sized can have about 12-13 diced tomatoes and if you have a smaller can it will have 10-11 whole tomatoes in it.

No. Crushed tomatoes are different from diced tomatoes.

Diced tomatoes have been cut up into small pieces which makes them ideal to use as a side dish or in stews, casseroles, and soups. They can even be used for baking.

How to Make Diced Tomatoes?

To make diced tomatoes, you have to start with fresh or canned tomatoes. Then they are peeled and seeded before being cut into small pieces.

They are then seasoned with salt, pepper, oregano, basil, parsley, thyme, garlic powder, or onion powder depending on your preferences.

Can you eat diced tomatoes raw?

No. Diced tomatoes are not meant to be eaten raw. They can cause your stomach to feel upset. They are best cooked before eating, especially if you want more flavor.

Diced tomatoes are easy to use in most recipes, but if you don’t have any on hand it’s important to know your best substitutes.

Choose whichever substitute you think will work best with your recipe.

Remember that they all give you different textures and flavors, so pick the one you want to use according to how your dish is supposed to turn out.

Now try these substitutes for diced tomatoes in your next recipe. 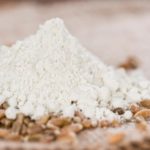